by Daniel Kirk
Used with permission. Originally posted here.
This academic year I am serving as Pastoral Director for the Newbigin House of Studies Fellows Program. This is the first in a year-long series of posts in which I will be blogging about the reading that the Fellows are engaging together. You can read more about the Fellows Program here.
The “T” word. Truth. It’s probably second to the “S” word (“sin”) in terms of words that you try not to drop with too much conviction in polite society—and sometimes not even in church.
Lesslie Newbigin saw this coming, and set out his case that the good news the church has to proclaim is nothing less than public truth which addresses its claim to every sphere of life. This happens across three short chapters (originally lectures) in his book, Truth to Tell: The Gospel as Public Truth.
This idea, that the gospel is public truth with ramifications for every sphere of life lies at the heart of the missional calling of the church: its need and its ability to demonstrate that the gospel makes sense of and enables us best to cope with the actual world in which we find ourselves.

Newbigin is trying to thread the needle between liberalism and fundamentalism in the 1990s. Both, he claims (and I think he has a fair point) think about truth in terms of verifiable fact. Fundamentalists, therefore, create lengthy apologetics, articulating a truth based on whatever the assumptions of some purported question are. They thereby leave aside the self-involving nature of biblical faith as truth observed and articulated and embraced by an active subject.


Liberals, on the other hand, leave aside the question of truth, mired as it is in what did or didn’t happen in a two-thousand year old Galilee to which we have little to no access, and offer a message of social justice that proclaims no good news at all. News would require something true to have happened.
Newbigin wants us to throw off the idea that unlimited pluralism is the only option open to us. He wants us to reclaim the idea that human life has purpose and we can know what that purpose is. We can know because God has revealed it to is in Christ.
The most basic claim that ties together Christians across the ages is, “Jesus is Lord.” This is not an invitation. It is a statement about world-wide, cosmic reality. So Newbigin wants us to leave aside trying to shore up an apologetics of a perfect Bible, and he wants us to leave aside denial of objective truth, and to reassert that we are who we are because there is a publicly testable claim to which we have given our allegiance.

Newbigin does not spend a lot of time in this short book telling us, exactly, what’s supposed to be “True” in this good news we proclaim. But he does give a couple of hints.
One criterion of truth seems to be simply this: does it make better sense of the world? And does it make us better, more highly flourishing people within that world?

…its reliability will be shown not by validating it against some external criteria, but by the way in which it enables the community that uses it to make sense of the whole complex world of things and happenings which human beings have to face—and by “making sense” I mean both understanding and coping with.

I really like that “coping with” piece. Newbigin’s plan isn’t one of mental explanations, but lived trust. Newbigin wants us to put our money where our mouth is. Christianity should, on its own grounds and not those of an external philosophy, show itself to make sense and to have the power to better integrate us as people, and better integrate us into the world.
But there’s a more basic claim in play for him, I think. Throughout he talks about how this is really about Christ, and Christ being Lord. The transformative moment that does not allow us to continue seeing the world as we used to is Jesus’s resurrection. Resurrection shows us that creation has a purpose even as the idea of creation shows us that it has an origin.

I confess, Newbigin’s assertions that the Christian claims make their claims on whole societies makes me nervous. I found myself thinking more than once that his Church of England marriage of Church and State had him too far slanted on the integration of church and state model than I am comfortable with.
But in the end, I think he actually achieves a balance that I resonated with. 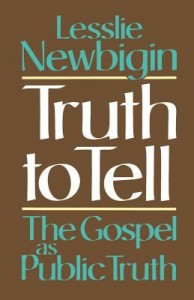 The freedom of the church is the freedom to speak truth to power. And, it is the freedom to speak truth to the Powers.
This means a call for political engagement without acceding to the mandates of preexistent parties or agendas. It means recognizing that political powers are powers created under and for the Lordship of Christ, so their functioning and thriving will depend on their reflecting the kind of rule that Christ exerts.
Here I come back to what is perhaps the central lack in Newbigin’s work. He never extrapolates on what he understands this Christ message to be. At its heart, I see the Jesus message being one in which life is found in the laying down of power so that others might live. I see it as power rising up from below and flowering to surprising abundance for those who had none rather than coming down from above and raining hell on all who stand in its way.
But too few take the cross as the interpretive key of what it means to walk in the way of Jesus. If I’m honest, I would rather have a completely secular state than a state in which the wrong Christians (as determined by me, of course), exert their authority in the name of Jesus.
We’re not first century Romans. We cannot engage in Anabaptist retreat. We have our vote and our voice. Those, at least, we must use. But how do we speak for the way of Christ?

In what might be the highlight of the book, Newbigin talks about this mission as one of subversion. The changes rarely, if ever, come in the big-picture blowing up of everything that was here before we showed up. More often, it means people climbing in, and quietly enacting the way of Jesus in a system that’s designed to function otherwise.
He asks what it would take for a psychiatrist or public school teacher or corporate executive or lawyer to acknowledge the saving work of Christ in their work psychiatrist, teacher, exec, or lawyer.
Here again, I get very nervous. I’ll be honest: for the most part I would rather have my kids taught by people who aren’t trying to work Jesus into the curriculum. Too much to undo when the kids get home.
So for me, this comes down to correctly nailing down what this truth is that we’re on about. Something I wish Newbigin has talked more about. But I would want to see this vision enacted as people realize that “Jesus is Lord” means that the life-giving power of God is enacted in places where self-giving love is the rule of the day.
In places where profits are secondary to paying laborers a fair wage, the life-giving power of God is at work. Jesus in Lord.
In schools where students who have known only chaos and turmoil find places of peace, the life-giving power of God is at work. Jesus is Lord.
In law offices where justice is pursued rather than simply billable hours, the life-giving power of God is at work. Jesus is Lord.
In a psychiatry session where someone realizes that they are deeply lovable and deeply loved and thereby finds peace in the midst of struggle and trauma, the life-giving power of God is at work. Jesus is Lord.
If that’s the truth we have to tell, if that’s the world “made sense of” by the gospel, then yes, let’s tell this truth. This is the missional calling of the church.